The city does not need the sun or the moon to shine on it, for the glory of God gives it light, and the Lamb is its lamp (Revelation 21:23). 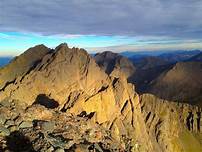 We were climbing Kit Carson Peak in the Sangre de Cristo Range in Colorado.  The trail traversed picturesque Willow Lake with a waterfall spilling over the surrounding cliffs.  After the lake, the trail became noticeably steeper until we reach Challenger Point, named in memory of the crew of the space shuttle Challenger.  It was a sobering moment as we passed the plaque with the names of the astronauts who died in the accident.  A series of mysterious ledges suspended high up on Kit Carson made the rest of the climb relatively easy.  The ledges dropped off several thousand feet to the valley below.  Across the valley, Crestone Peak was bathed in yellow light from the afternoon sun.  We were suspended so high above the beautiful sunlit valley below that we had the sense of walking in heaven.

As we descended Kit Carson Peak and traversed the ledges again, the afternoon sun had faded and the glorious scene of the valley below and Crestone Peak was all but a memory.  In the new Jerusalem, the light will never fade because the glory of God himself will continually shine, and Jesus, the Lamb of God, will be the lamp.  Darkness and evil will be banished forever.  There will be no more night, no death, no crying, no pain.

Prayer: May your glory O Lord be manifested today as we wait for the heavenly city.

THOUGHT FOR THE DAY

What is seen is temporary, but what is unseen is eternal.

READ Genesis 22:15-18 I will surely bless you and make your descendants as numerous as the stars in the sky (Genesis 22:17). We had driven to Kite Lake at 12,000 feet in the Mosquito Range Read more…

READ Exodus 33:18-23 When my glory passes by, I will put you in a cleft in the rock (Exodus 33:22). We were climbing El Diente Peak in the San Juan Range in Colorado, and were Read more…

Thorn in the Flesh

READ 2 Corinthians 12:7-10 My grace is sufficient for you, for my power is made perfect in weakness (2 Corinthians 12:9). I have peripheral neuropathy.  It is called the silent disease because most people have never heard Read more…